After seeing the “Ghostbusters” remake last night, I left the theater feeling more excited than usual. The film isn’t just a nostalgic rendition of a spooky, slapstick comedy. It’s a statement for women everywhere. “Ghostbusters” packs an all-star cast of kickass women who display strength, charisma, and intelligence- traits rarely seen by women in the television and film sectors.

The Center for the Study of Women in Television and Film conducted a study in 2014, which calculated that women made up a mere 12% of protagonists in top grossing films for that year. In 2015, that number jumped to 22%. While this is a slight improvement, 22% is still a shameful representation.

The Dannenberg School for Communication and Journalism at the University of Southern California examined 2,500 female roles in the top 100 grossing films of 2015. Of those roles, 31.6% of women were dressed in a stereotypically provocative or sexy way, compared to 7% of male roles. Additionally, women only possessed one third of all speaking parts.

What do these studies tell us?

Women are and continue to be underrepresented and hyper-sexualized in the media. It has been proven consistently that moviegoers are relatively equal in gender, so why do women continuously get the short end of the big screen stick?

“Ghostbusters” is one of the few films that promises to change these statistics. In true role-reversal form, Melissa McCarthy, Kristen Wiig, Kate McKinnon, and Leslie Jones are the four ladies running the all-female Ghost Busters business. Chris Hemsworth plays the stereotypical attractive, yet skill-less receptionist who serves little purpose and eventually becomes the damsel in distress, so to speak. These unexpected roles are a refreshing (and hilarious) breath of fresh air. 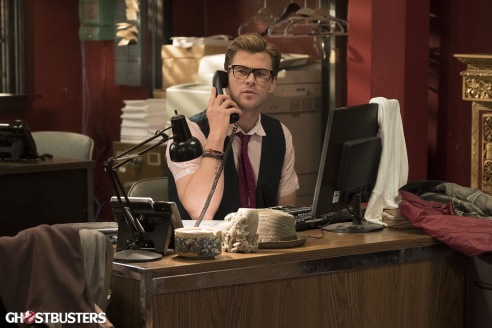 This film is a must-see and as a woman I felt incredibly proud to see so many talented female actresses on the big screen. I can only hope this trend will continue and women can finally get the attention they deserve- as strong, charismatic, intelligent individuals.

Because let’s face it, it’s about damn time.