So you’ve been hearing all about the death of the Great Barrier Reef, and while you want to understand what’s going on in our oceans, the science just seems too dense to understand.

I’m here to break down and simplify the process of coral bleaching so everyone can make cognitive sense of it, not just the scientists.

I’ll start by saying the Great Barrier Reef is not dead, not yet anyway. But it is dying. To understand this concept, we need to first understand coral. Corals are actually marine invertebrates, which classifies them as animals. This is why instructors tell you to keep your distance when snorkeling. It’s incredibly easy to damage corals, even just by touching them or spreading sunblock that hasn’t fully absorbed into your skin.

So we’ve established that coral is alive and living, which should make coral bleaching sound a whole lot scarier now. But let’s introduce another key player: zooxanthellae. For simplicity, we’ll call these guys zooks. They’re most easily described as plant-like organisms. You know how sometimes a friend asks to crash on another friend’s couch in exchange for purchasing food or cooking meals? That’s pretty much the relationship between corals and zooks. Coral reefs offers a safe, comfortable refuge for zooks, whereas the zooks offer an abundance of energy or food for the coral reefs. This symbiotic relationship between the two is extremely important because without it, the coral could not survive.

Back to coral bleaching. How does it happen? Well, when corals feel an extreme amount of stress through either rising sea temperatures or pollutants, they exhale the residing zooks. You might be questioning why coral is so self destructive, but let’s be honest, even human beings sometimes display poor stress responses and coping mechanisms. It just happens. As the damage to the ocean becomes more constant, more and more corals are ridding themselves of their most vital components.

(Coral bleaching gets its name from the drastic color change that occurs through this cycle. What was once an environment full of vibrant colors has become a dismal, colorless display.) 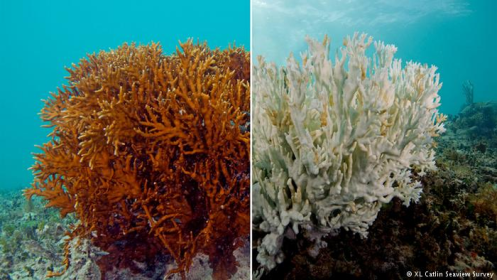 This all ties into global warming and climate change. (Believe it or not, the two are different.) Human beings produce these deadly carbon emissions through driving cars, eating meat, overindulging in unsustainable products and creating large carbon footprints. (Click here to calculate your carbon footprint.) Now, no one is saying to travel by foot and commit to only ever eating salads, but there must be a fair balance. All of these actions can be managed effectively, but we’ll save that for another post.

The good news is that to an extent, the damage is reversible. As I mentioned, the Reef is dying, but it’s not dead yet. There’s still time to make a change and protect our oceans. We must try, because we cannot afford to lose such an integral piece of our earth.

For more information regarding information and involvement, please see the resources below: 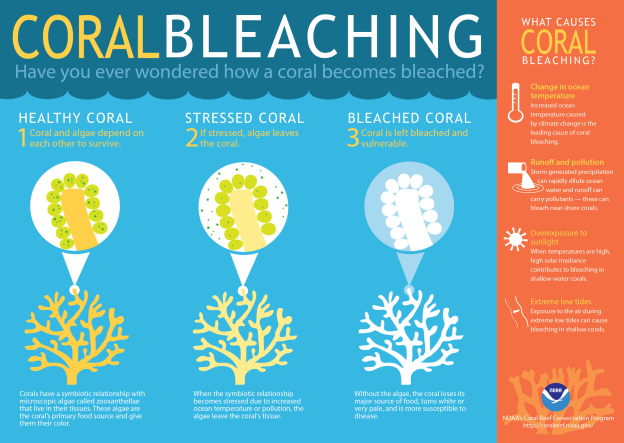